Thank you for your stay and for taking the time to leave us feedback.

Your safety and well-being is our utmost concern, especially during these times. I am sorry to hear the relaxed services and limited housekeeping service due to COVID 19 greatly affected your stay. I am also sad to see some disappointing aspects of your visit, particularly with the manager's service, guests not wearing masks, and practicing social distancing. IHG values your experience with our hotels, and we would appreciate the opportunity to look into this for you.

I have shared your comments with the upper hotel management. I am confident that the steps taken will avoid similar issues from reoccurring in the future. I have also sent you a private message regarding your experience.

I hope you give our hotel another try!

Self-service Breakfast was tasty and had a good choice.

Staff were friendly and helpful too.

Would definitely stay here again when visiting from the UK.

The room was lovely, it was small but was to be expected in New York. It was very clean and had everything we needed. The bathroom and especially shower was very nice. The beds were comfortable and we had a nice view of Brooklyn.

The location for us was excellent, we stayed in Brooklyn before when we came to New York and loved it because the prices to stay in central New York are ridiculous, plus sometimes its nice to get away from the hustle and bustle. It was a 2 minute walk from the subway and about 30 minutes direct on the subway to the centre of the action.

Breakfast was good quality and included in our stay which was good.

We didn't have much to do with the staff apart from check in and check out, but they seemed pleasant enough.

I have nothing negative to say about his hotel it was perfect for our stay and I would definitely stay here again.
« less

Upon arrival , told that no IHG points etc as not booked through their website and was placed in the basement.

Once we had completed the obstacle course of laundry carts we noticed a very strong smell of cannabis coming from the room next door. We would have complained but after travelling for 10 hours plus we just wanted to bed down for the night.

Smell had gone the next morning , but paper thin walls and noisy people in other rooms was another thing.

Breakfast was very basic, but it was free. Few places near the hotel where you could grab a bagel etc.

Housekeeping almost none-existant. Towels changed a couple of times , but the rubbish bin in the bedroom never emptied and by end of stay we had accumulated quite a pile.

Positives: next to Union Street subway on the R line , so downtown manhattan about 20 minutes away , free luggage storage.

Would you stay here again: NO
« less

Thank you Etelka for your candid feedback. I am very sorry to hear that your stay at the hotel was not up to par. Please note that this information has been passed on to our concerned staff. Despite this, we hope to be able to welcome you back on a return visit to NYC. Tristan Wilkins Front Desk Supervisor. 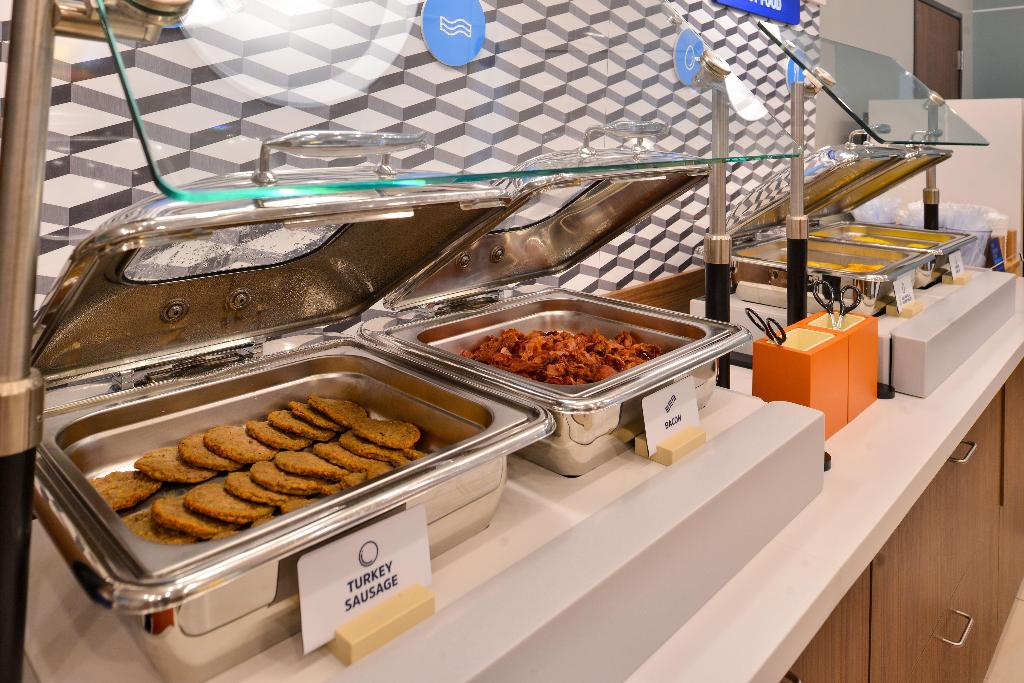 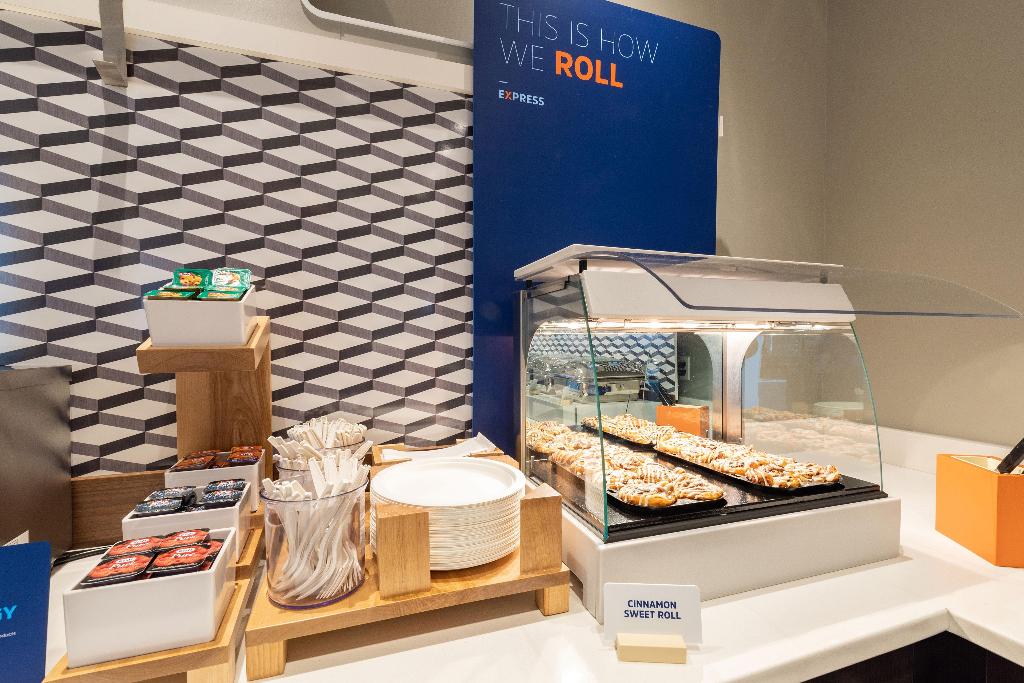 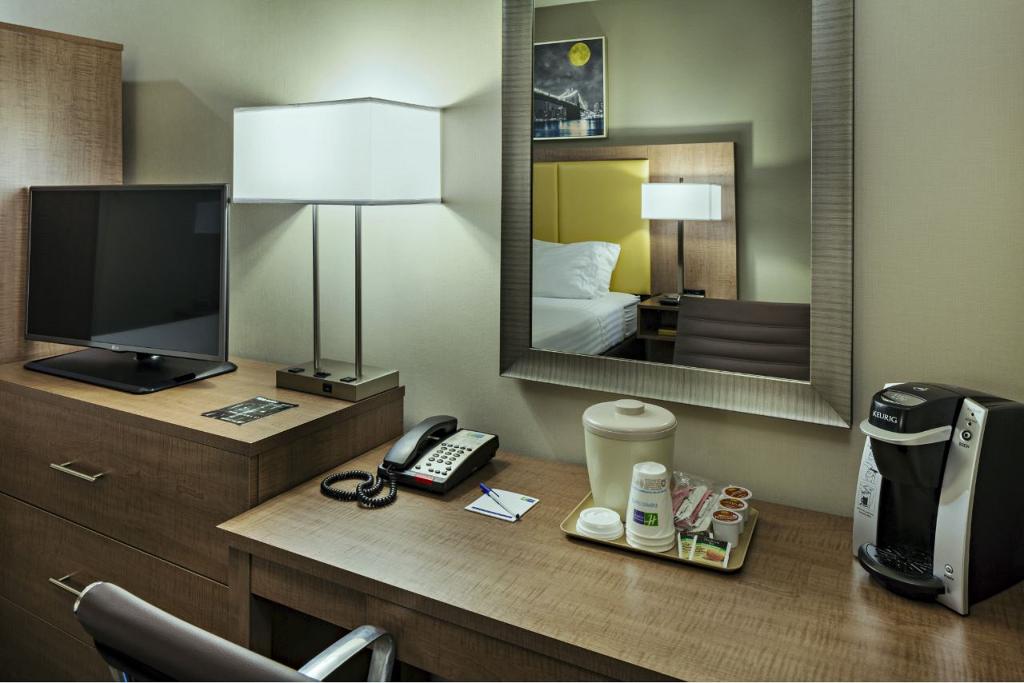 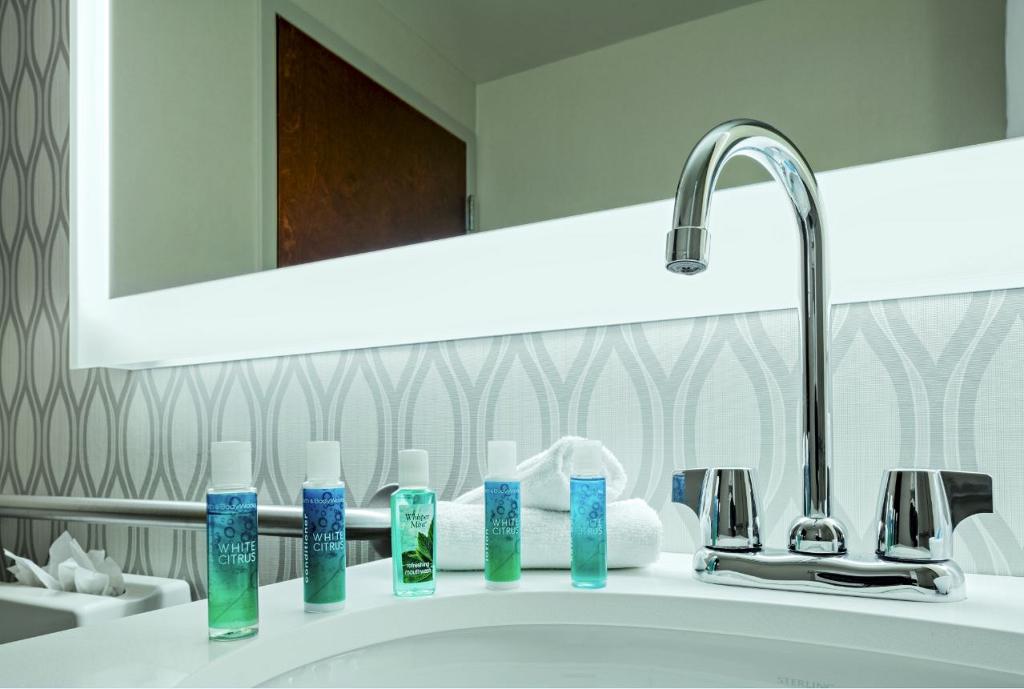 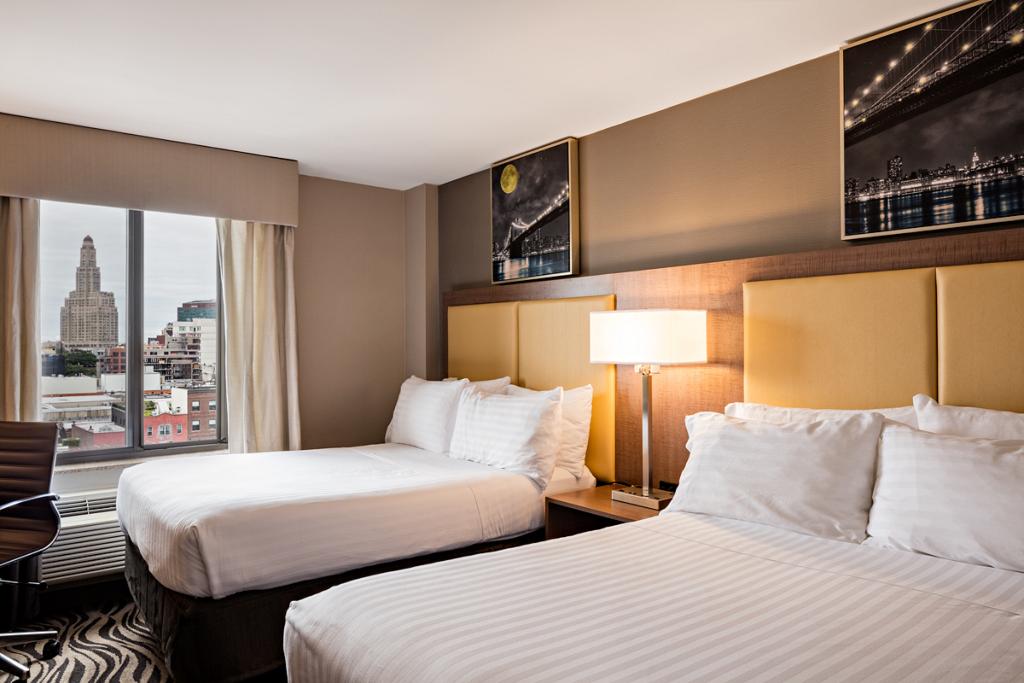 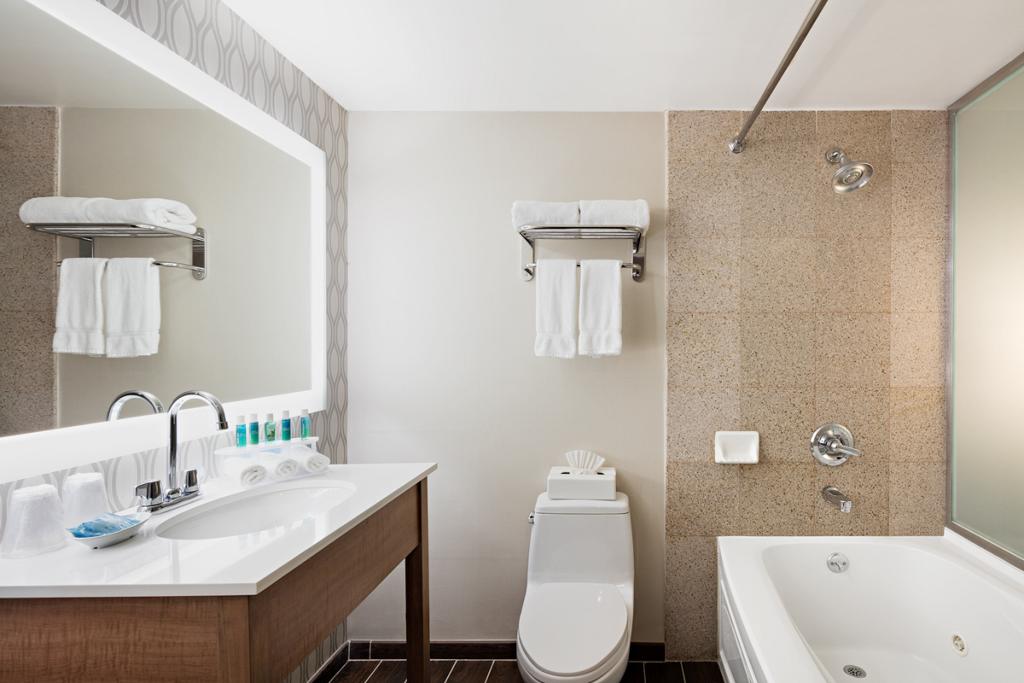 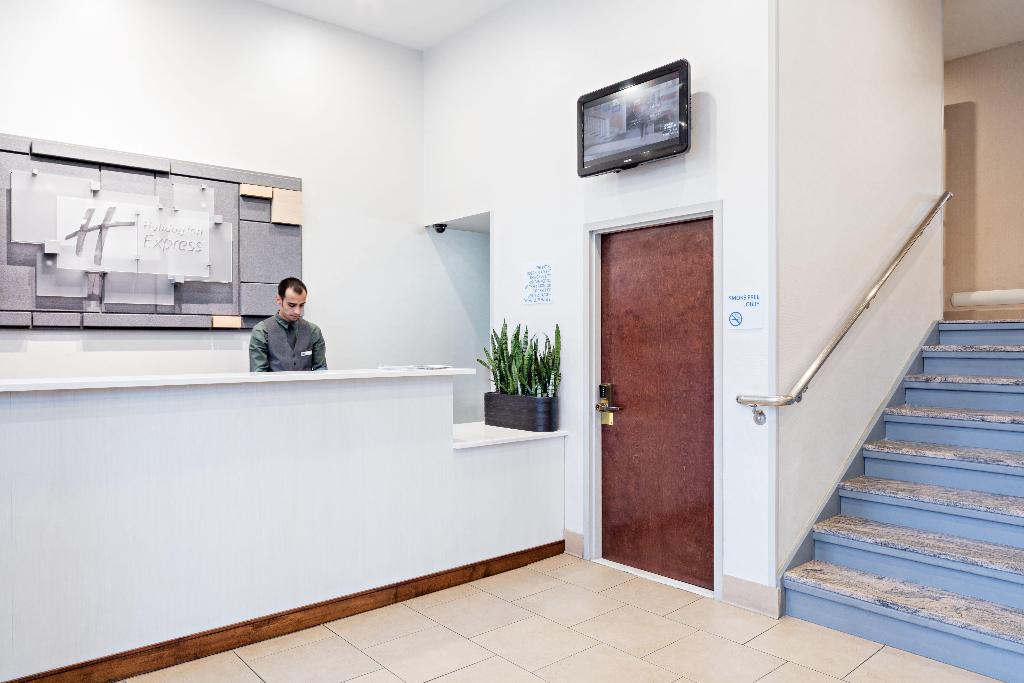 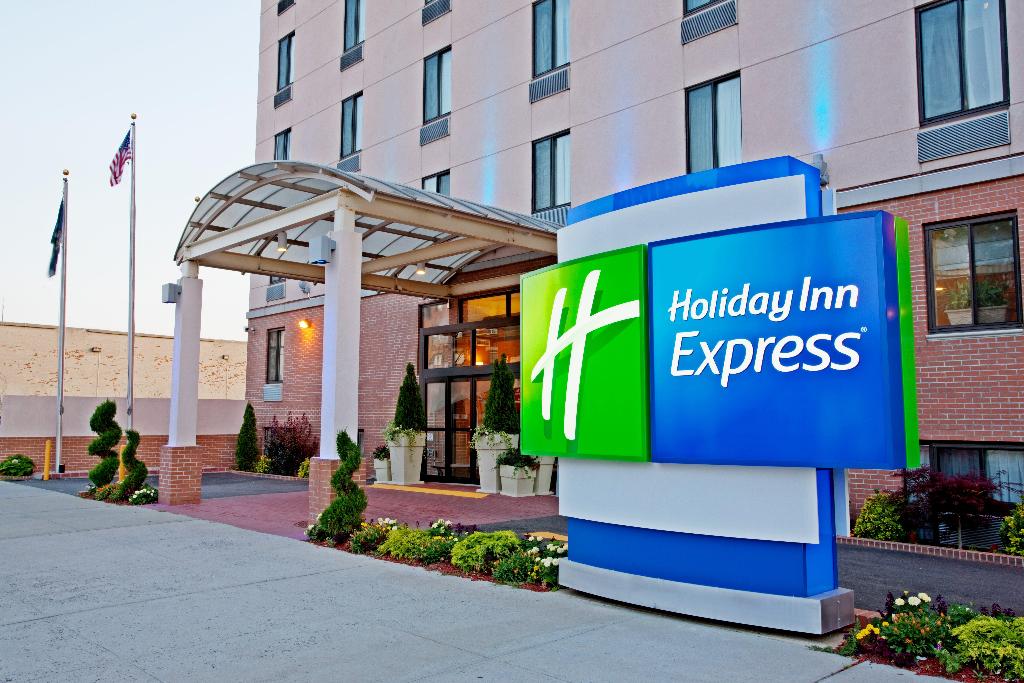 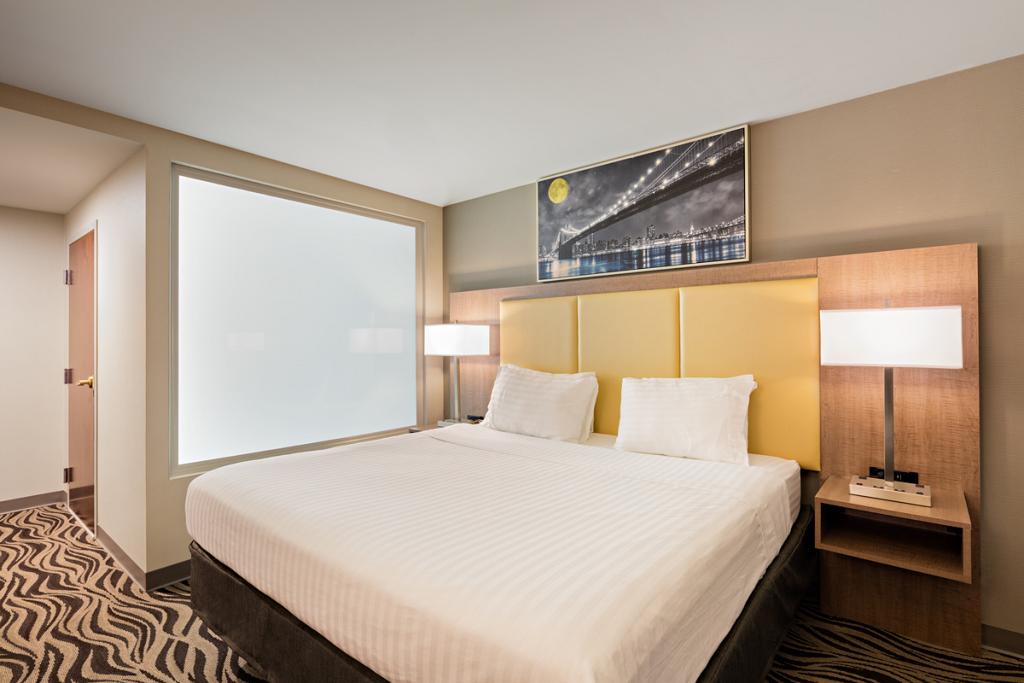 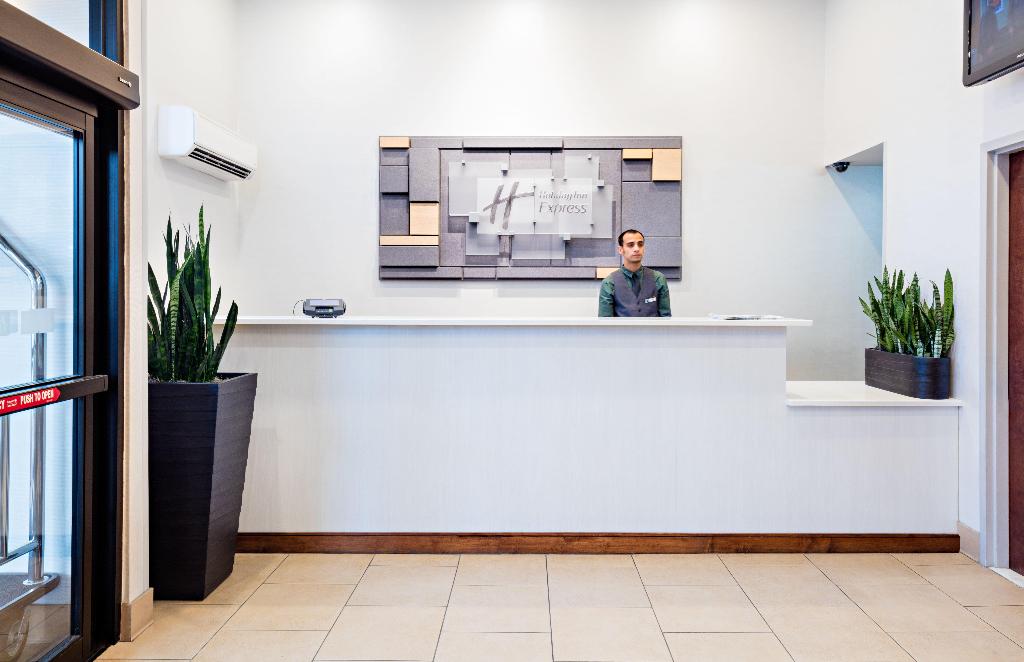 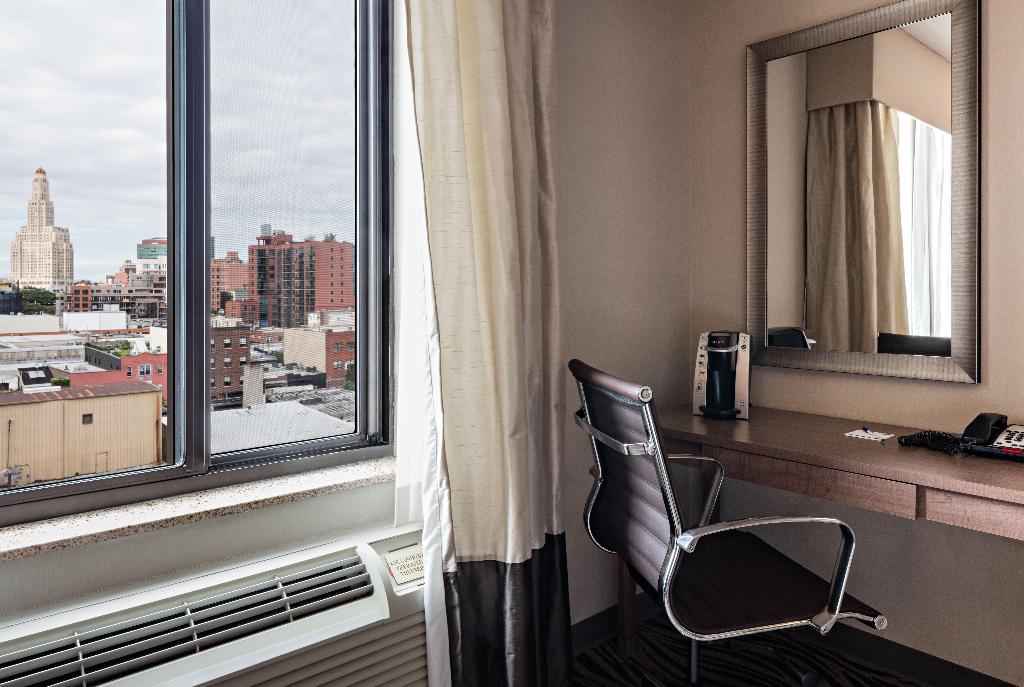 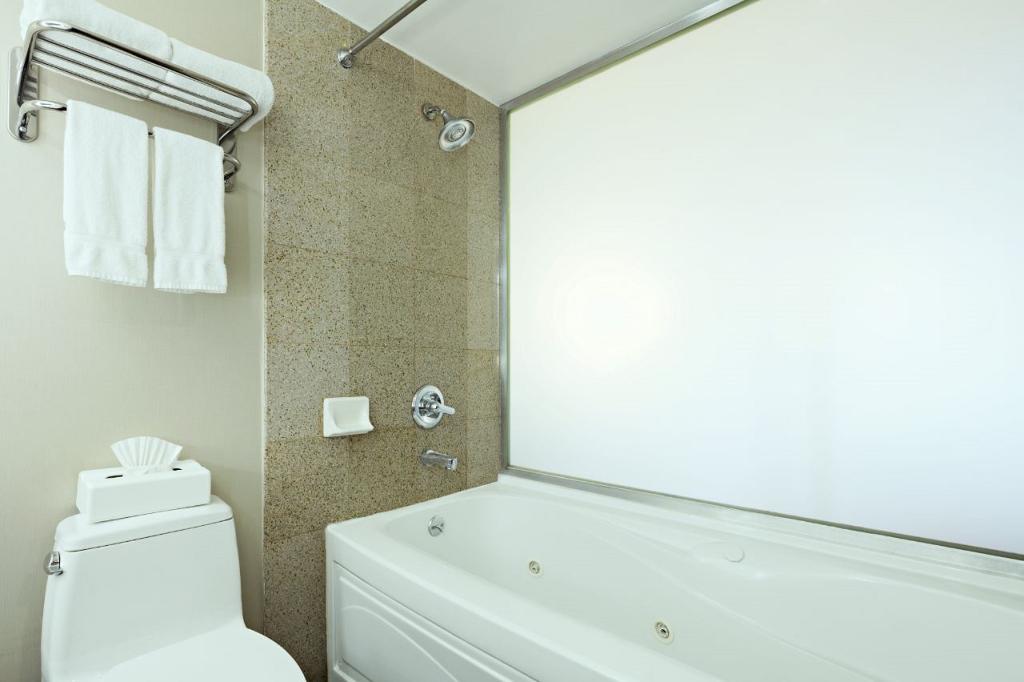 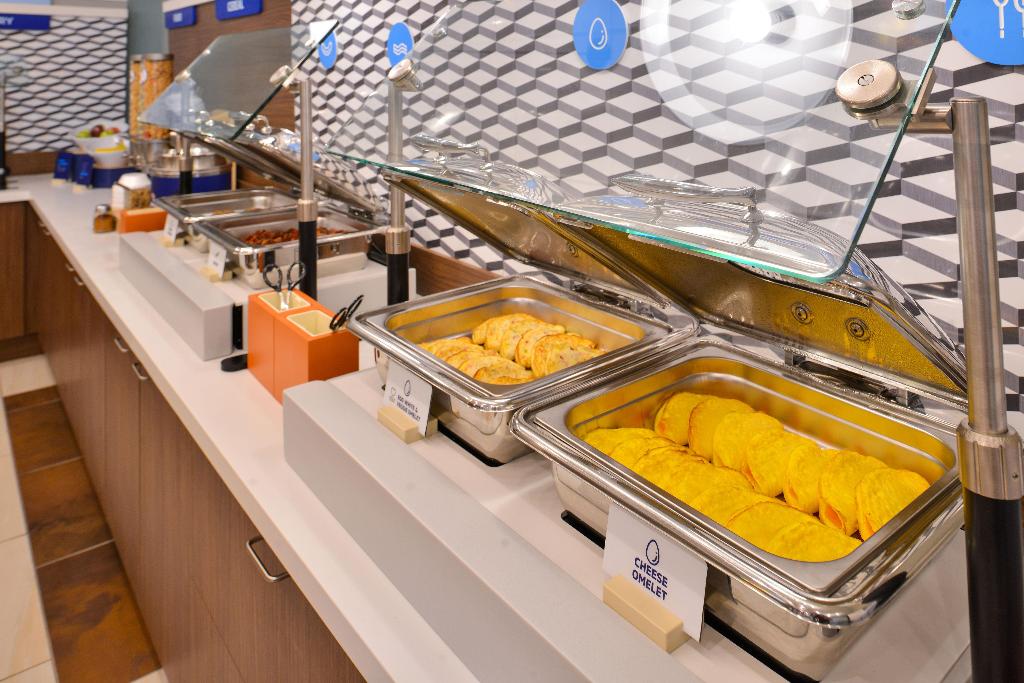 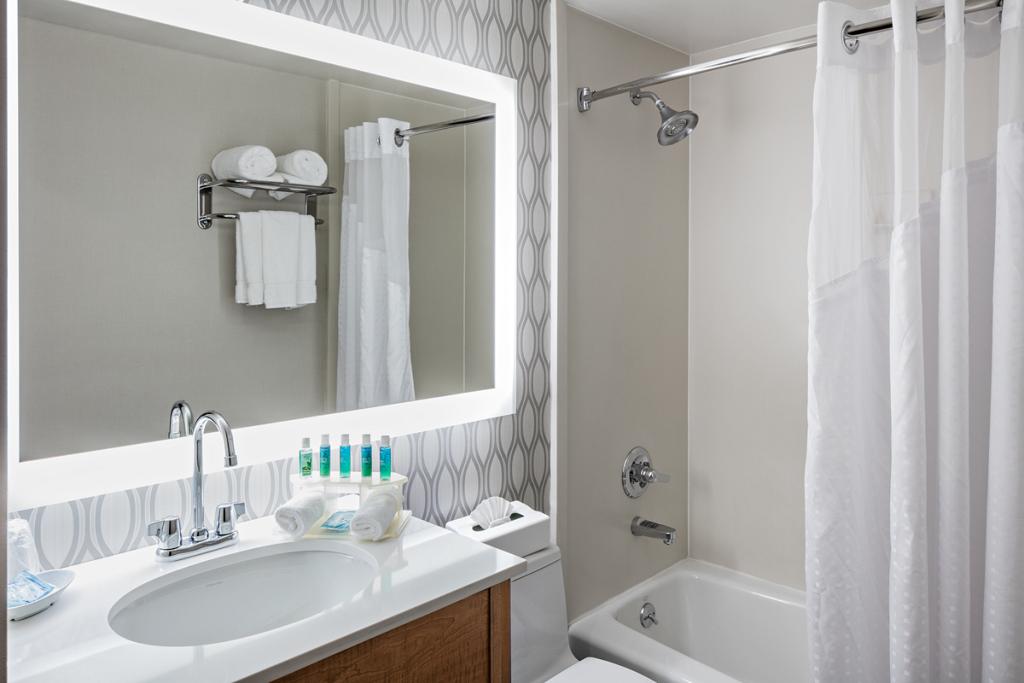 Holiday Inn Express Brooklyn is located in the Park Slope neighborhood of Manhattan. Like many of Brooklyn's more upscale neighborhoods, Park Slope was recovered from decline by community-minded working class residents, and it retains the character of a tight-knit community even as it battles the now widespread influx of bourgeois bohemians and the ensuing rise of property values. Speaking of which, Park Slope is bordered on the north by the Barclays Center and Flatbush and Atlantic Avenues, 4th Avenue to the west, Prospect Park West on the east, and (depending on who you ask and how long they’ve lived in the neighborhood) 9th Street, 15th Street, or Prospect Avenue to the south. The advent of South Slope, extending southward from 9th Street, has jarred the boundaries of Park Slope, although most people consider the neighborhoods to overlap—think of South Slope as the West Village to Park Slope’s Greenwich Village, except in this case the subset is the poorer neighborhood (relatively speaking, in both cases). Park Slope is surrounded by Prospect Heights, Boerum Hill, Carroll Gardens, Windsor Terrace, and Sunset Park, in addition to newly delineated neighborhoods like Gowanus and Greenwood Heights.

Prior to the 1950s, Park Slope was home to many wealthy Brooklynites, who's mansion-sized footprints still line the neighborhood's verdant border, Prospect Park. Between 1st and 2nd Streets on Prospect Park West, the Brooklyn Society For Ethical Culture sits inside the Romanesque-style mansion home of William H. Childs, millionaire inventor of Bon Ami Cleaning Powder. There's also the $8.5 million mansion on the corner of Carroll Street and Prospect Park West, one of the more stately mansions in the area and formerly home to actors Paul Bettany and Jennifer Connelly. Several Romanesque and Victorian mansions site between Montgomery and Garfield Places. Just a few blocks down, on the corner of 1st Street, is the 1889 mansion built for paper industrialist Henry Hulbert, a Romanesque Revival building that has since been taken over and expanded—into the first New York school to be an LEED green building—by the Poly Prep School. Also notable is the 14th Brooklyn Armory on 8th Avenue and 14th Street, which formerly housed the 14th Regiment New York State Militia best known for service during the Civil War. One of Park Slope's most interesting buildings, the Pillar Of Fire Church, is notable for the same reason it's no longer at the corner of Sterling and 7th. In 1960, two commercial planes collided over Staten Island in what was then the worst disaster in aviary history; one of the airliners staggered on for an emergency landing, but flew so low that a small miscalculation crashed it into the Pillar Of Fire church, ironically.

Speaking of Prospect Park, the area—which was designed by Central Park architects Frederick Law Olmsted and Calvert Vaux—is an attraction in its own right, with a zoo, the country's first urban Audubon Center for bird-watching, Kensington Stables, and the Prospect Park Bandshell, which hosts Celebrate Brooklyn, an annual summer music series. And at the northwest corner of the park is Grand Army Plaza, the stately gateway to Prospect Park which features the Soldiers' and Sailors' Arch, a Brooklyn version of the Arc de Triomphe designed by the same man who designed Grant's Tomb in Riverside Park.

Park Slope's two main thoroughfares—5th and 7th Avenues—are home to dozens of fine shops, boutiques, restaurants and bars, as well as a few quirkier places. 7th is the fancier, more well-heeled of the two, and is dominated by boutiques and restaurants, with very few nightlife options, save for venerable old-timers’ bar Old Carriage Inn and newcomers Parish Bar and American Cheez. Jean-Georges-trained Top Chef alum Dale Talde has created a miniature empire in Park Slope, with two of his restaurants, Thistle Hill Tavern and the eponymous Talde, offering some of the best cuisine on 7th Avenue. If his deft blend of seemingly disparate cuisines isn’t your cup of tea, there’s quintessential, 24-hour diner food at Donuts. In the mood for Chinese food? Szechuan Delight has the best in the neighborhood. Burgers? Try Brooklyn Flipsters. Indian? Bombay Grill. Thai? Beet. Pizza? Well, you’d have to try out Pizza Plus or Smiling Pizza, where Star Trek’s Patrick Stewart, a local, had his first “slice.”

Over on 5th Avenue, there’s no paucity of restaurants, for sure, but the onus seems dead-set on drinking. For every Stone Park Cafe or Benchmark, there’s a Gate or Loki; for every Blue Ribbon or Grand Central Oyster Bar, there’s a Beauty Bar and a High Dive; for every Sidecar, there’s the other ten bars between 9th and 16th Streets.

There are also oddities like Brooklyn Superhero Supply, which has a secret identity: the gallons of anti-gravity and cans of invisibility available for purchase in the store provide both a front and donations for the 826NYC charitable organization run by author Dave Eggers. Try on a cape and step up to the fitting room—a metal grate atop a powerful fan that will blow the cape around violently, letting the shopping superhero know how it'll react during flight. If that doesn't sate your need for the fantastic, head down towards 9th Street and Galaxy Collectibles, Park Slope's main comic book store.

At the outskirts of Park Slope, you'll find the Brooklyn Lyceum, a multi-purpose venue that's home to live music, theater, dancing, and even a gym, a long way away from its origins as a public bathhouse. A few blocks north, above 5th Avenue on near Union Street, is Union Hall, where a full bar stretches the length of a wall opposite massive floor-to-ceiling bookshelves and borders a room featuring two full bocce ball courts and a jukebox as well-stocked as the bar. And thumping along below that, you'll hear live music from national acts as well as local favorites in their basement venue. Rock Shop also features live music in a more lively, grittier environment. For a bit of food with your libations, The Dram Shop offers some of the best burgers to be had in Park Slope and Brooklyn in general, as well as fine collections of scotches and bourbons and a whole menu of delicious foods.